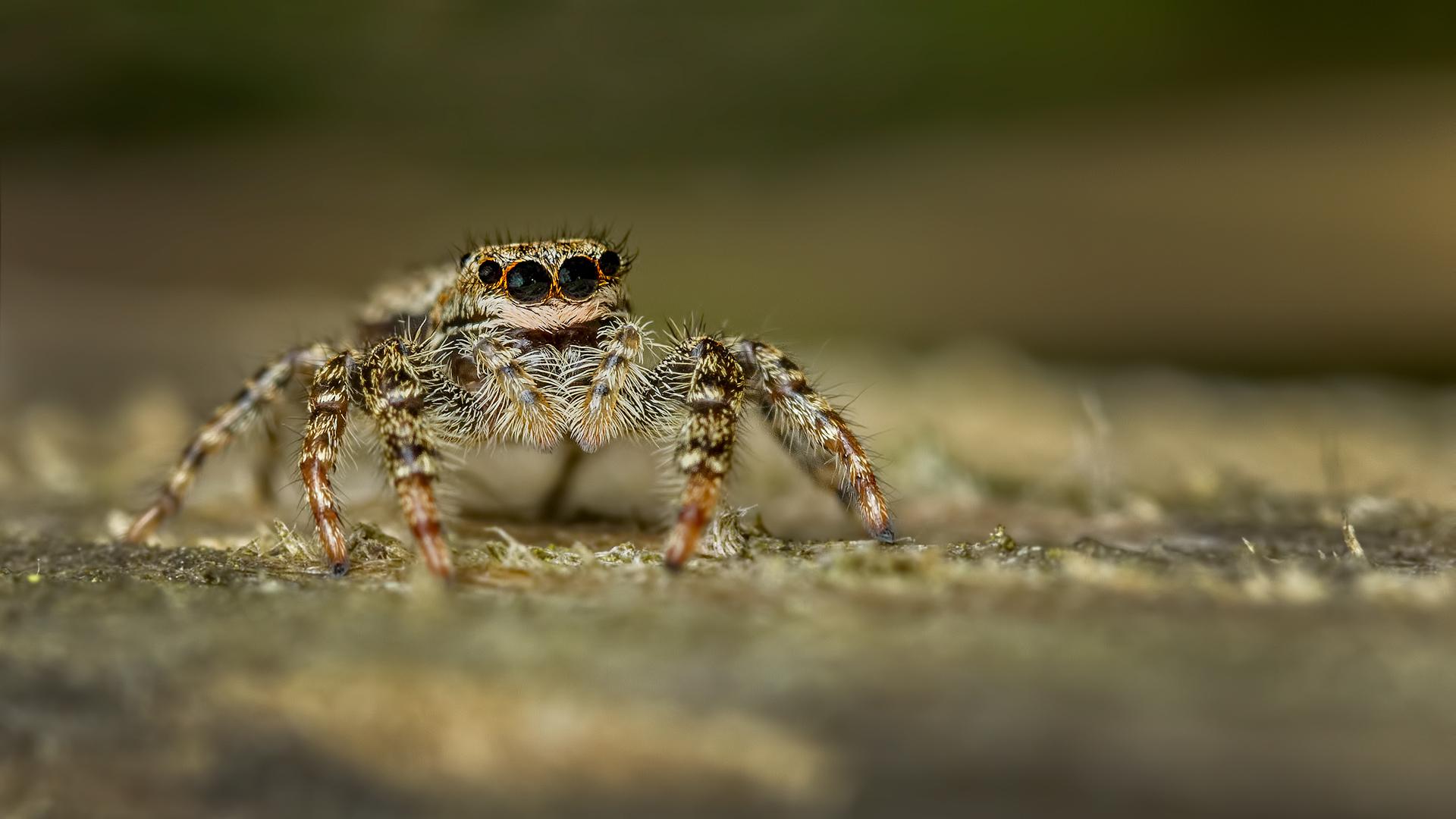 As a kid spiders held no fear for me, I would catch them in jars and all the other things boys do. I would think nothing of clambering through trees ending up covered in creepy crawlies. In my late teens, probably because my father had a big fear of spiders, I begun to feel a little uncomfortable around them. It is only the giant house spiders (Eratigena atrica) that really make me cringe, and only when they are in my house. I have to capture them and remove them on discovery, I know not why I feel like this. So how do I manage to get millimetres away from them and other spiders with the camera? 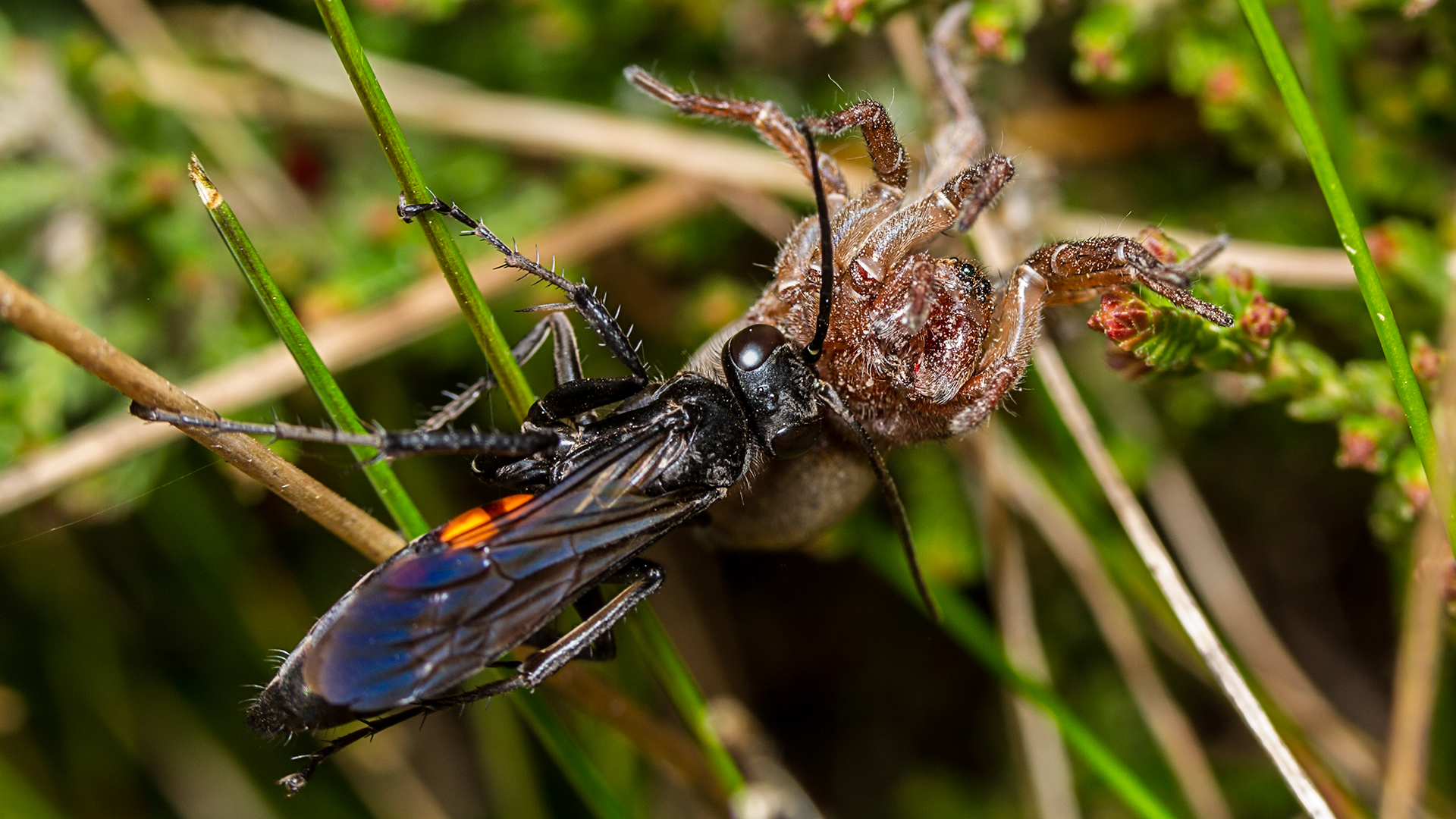 Through the lens there is a certain detachment from the subject in question. It is almost like watching a horror film, on the big screen it is fine but you wouldn't want to let the bloke with the chainsaw loose in your living room. In the case of photography it is more than that. When trying to create a shot my concentration is focused and not on whether a tarantula is going to fire hairs at me or inject me with its venom. So I can just get on with the task in hand, in my little bubble of comfort behind the viewfinder.

While I have photographed some really deadly spiders in my time, as well as some that can have a very long lasting and painful effect, here in the UK we are quite lucky to have no native killers. Having said that, most spiders do have venom but only a small number of them have a bite capable of puncturing human skin. We do have a few here, such as the Walnut Orb Weaver pictured below. After a bite from these gorgeous creatures some people can have a bad reaction to their bite, which can be painful and last some time after they inject their combination of neurotoxins. Should we be afraid, nah. Spiders, contrary to popular belief, do not run around looking for something to get their fangs into. They on the most part are very timid creatures and will only bite if they, or their nests, are seriously compromised. Some have great eyesight but not all, most have senses way beyond ours for touch, movement or heat. Reacting to all this they will in most cases, they will do everything they can to avoid contact with humans, which can make photographing them a real challenge. 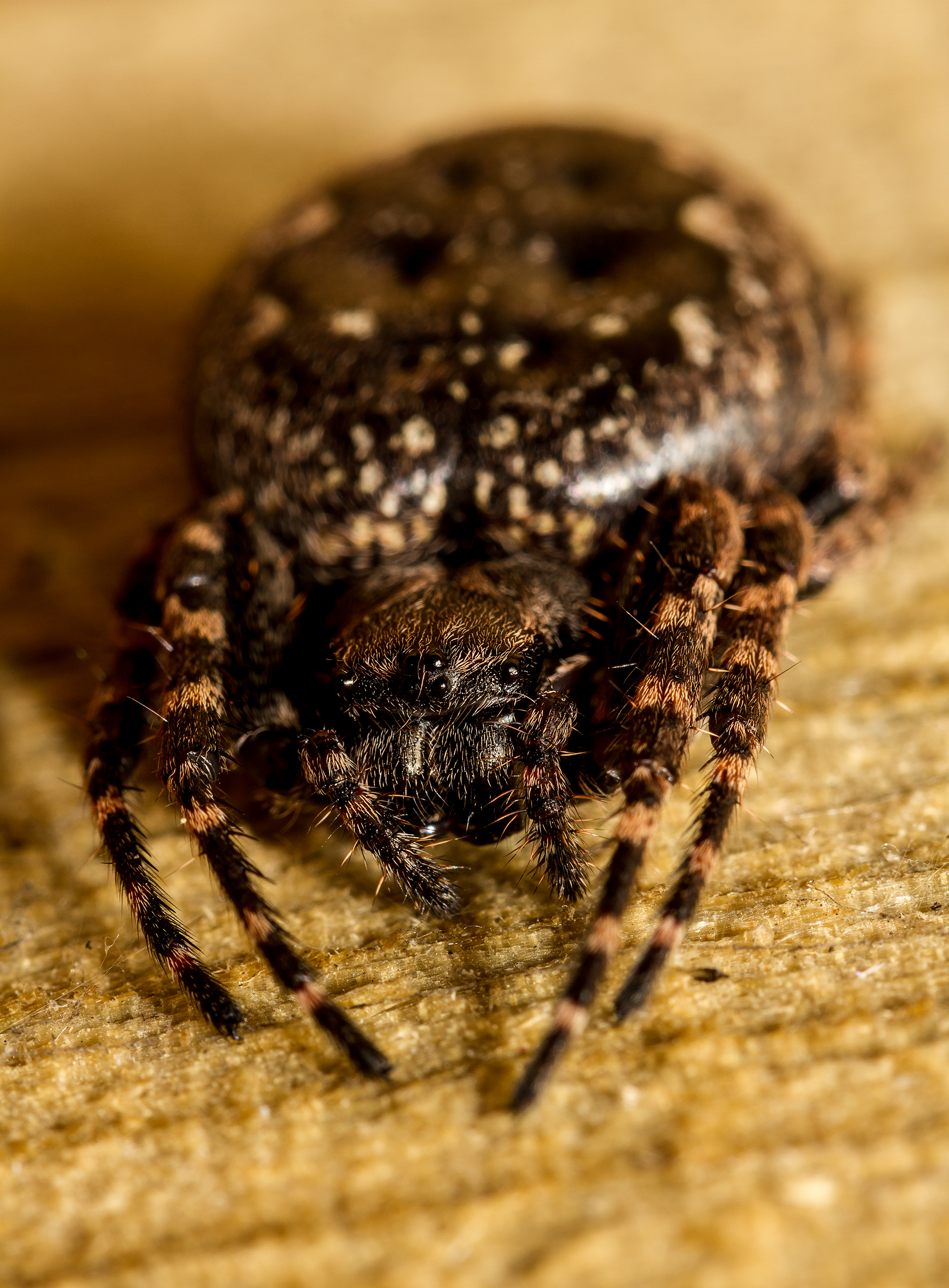 In the spring I don't find too many spiders until the foliage really springs up. With their obvious drawbacks, nettle beds are one of my favourite places to find spiders in the spring and summer. It does need to be a calm day for me as grabbing the stems of stingers is not the most comfortable thing to do. There are a number of species of spider that seem to live in the nettles especially when they have an egg sac. If spiders are guarding their nest I find they will often be easier to photograph, they are simply not moving off for anything. Other species however carry their egg sag around with them so while they will be a little slower than normal, they are still hard work. 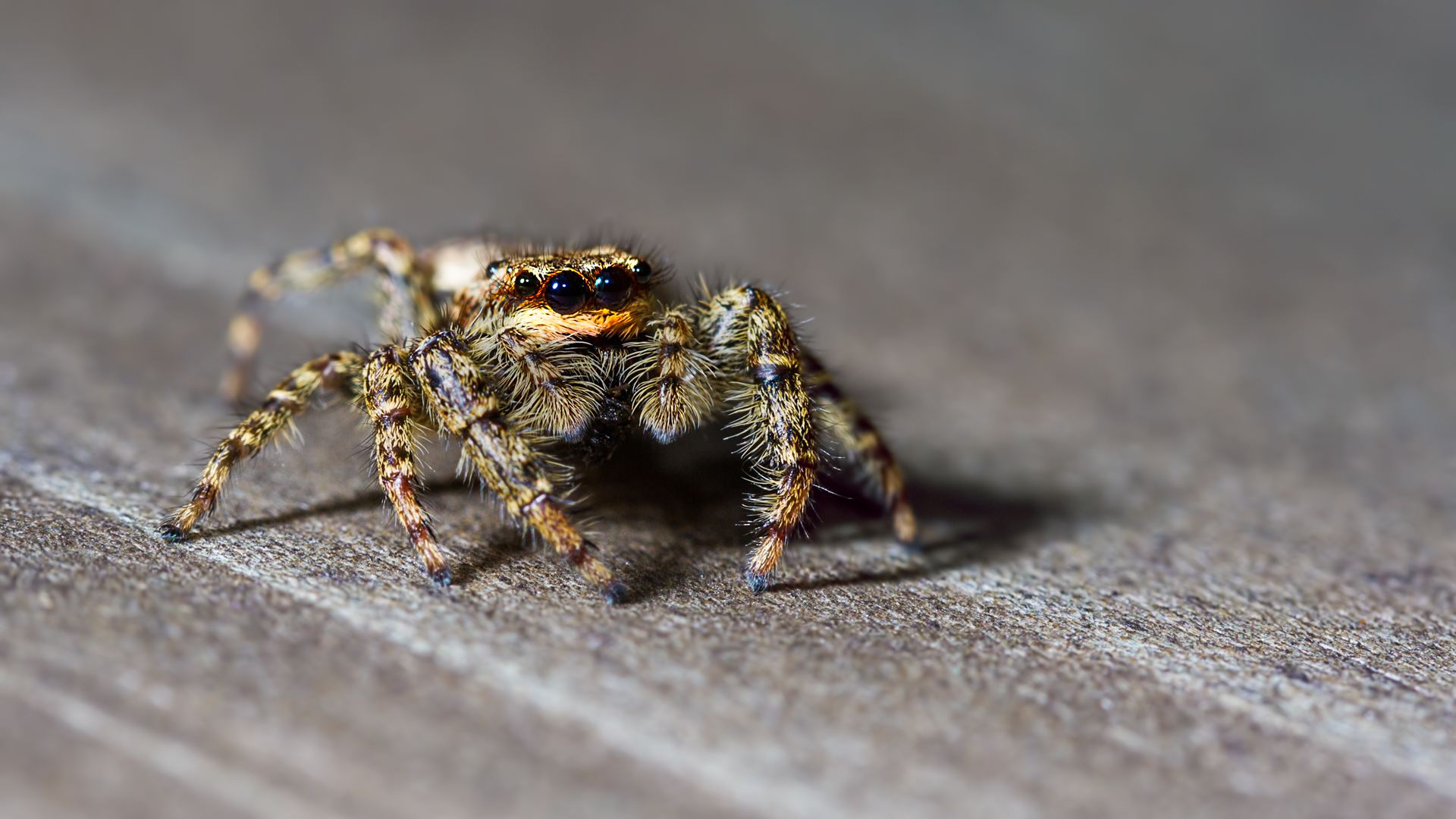 I rarely go out looking for something specific and very often will simply try and get the best possible image photographically I can on the day, whatever the subjects I find may be. There have been some exceptions such as the Raft Spider which I have yet to locate. Almost everywhere I go there will be plenty of our arachnid friends willing to be my model for a while. One of my favourite groups of spiders is the jumping spider. For some reason they seem to have a personality and a look that doesn't bother me. They have been loads of fun to both watch and photograph and also a great little spider to help reduce the  wibbles. I say that, but when one decides it has had enough it will often jump straight at the lens, always good to get the heart racing a little. Being so small I find that 1:1 is not always enough magnification for them, at least the smaller specimens,  to be the main subject. In these cases I prefer to shoot them as a small part of their surroundings. Not sure I have nailed it yet especially after another local photographer showed me a shot of his, a stunning image of a rose with a jumping spider in the middle - ( Lakesforlife on Flikr ). Sometimes I add extension tubes to my EF-S 60mm to get a bit closer and fill the frame with these amazing little spiders. Shooting this close often needs a well diffused flash coupled with a lot of thought to the background. When using flash the background needs to be a similar distance to the subject as the camera is from the subject or it all ends up going black. When I first started macro I liked the black background effect but it soon grew tiresome for me. I also tried using a ring flash but other than the flat lighting they produce, it really becomes obvious in the eyes of jumping spiders where you can see multiple ugly little copies of the ring flash. Instead I have a standard flash gun with one of many different diffusers depending on the subject. With hugely reflective eyes, and the fact there are eight of them on most jumping spiders, I try to keep the flash power as low as possible in an attempt to keep the catch lights explode in a big white mess. 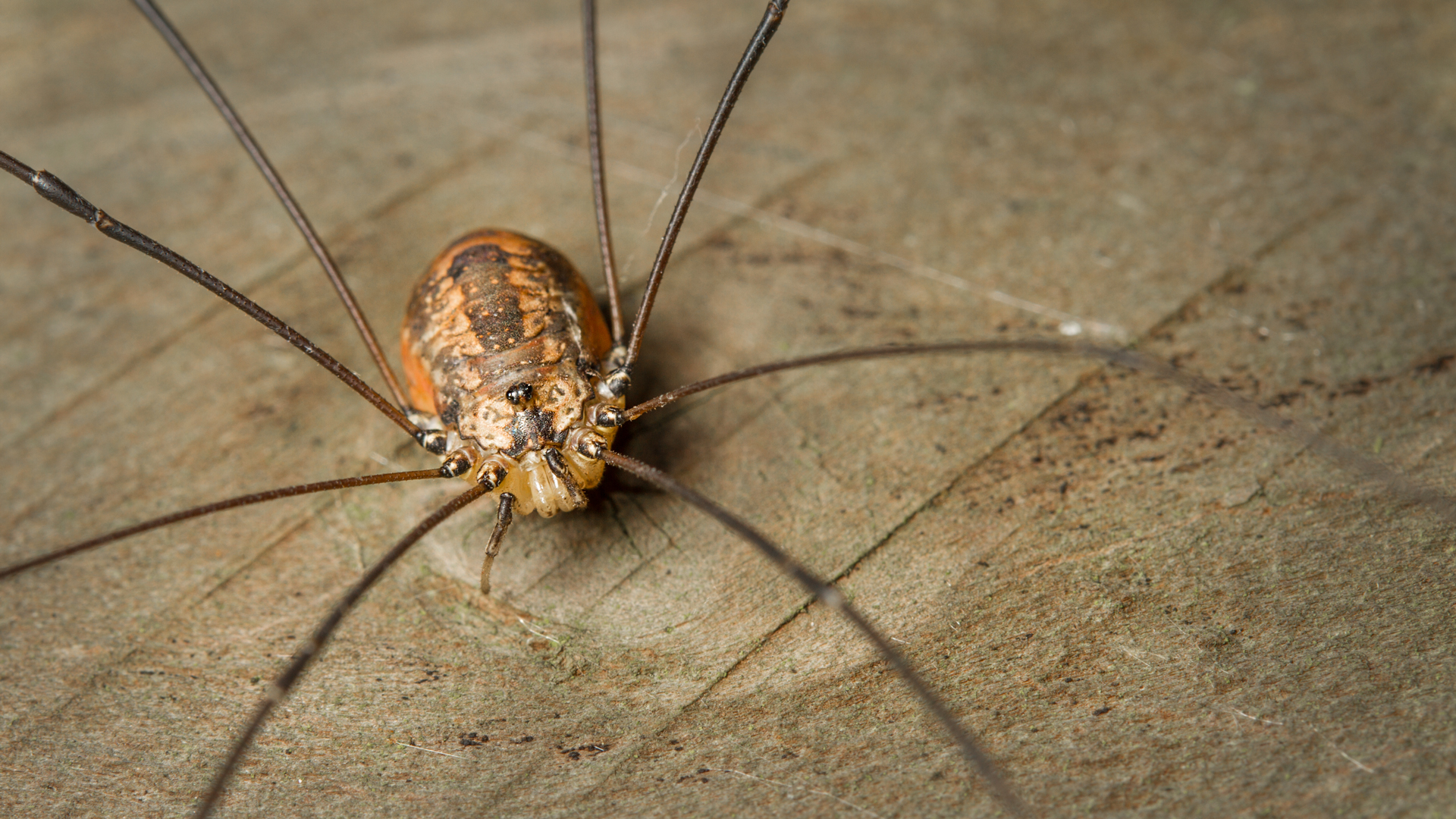 While we are talking about eyes, one of the really annoying things about some species of spiders is the fact they hang in their web where you cannot see their eyes. They always seem to have their backs away from you just showing off their bellies. As interesting as the underside of a spider can be. photographically I prefer a shot showing their eyes and fangs. Garden spiders are a prime example of this and will usually sit in the middle of their wonderful web oblivious of the fact you want them to pose for you. Other spiders always seem to hang upside down from their little nets again usually in the most awkward position for a shot. Sometimes blowing on them will stir them into moving to a better position or in most cases run and hide. So instead I either wait for a little snack to land in their trap, or just try and find another subject. Some spiders, especially those that create a little tunnel in their web to emerge from, seem to be more curious. When you approach and carefully wait, they sometimes move to the tunnel opening to investigate. This is one of my favourite times to take a shot, the background is their nest, they are usually facing you with that menacing stare. All the elements are there for the stuff of nightmares and a great image. In most cases you only have one opportunity to get the shot right as the shutter, your breath, the flash or any number of tiny things can send your beastie back into hiding at the blink of an eye. 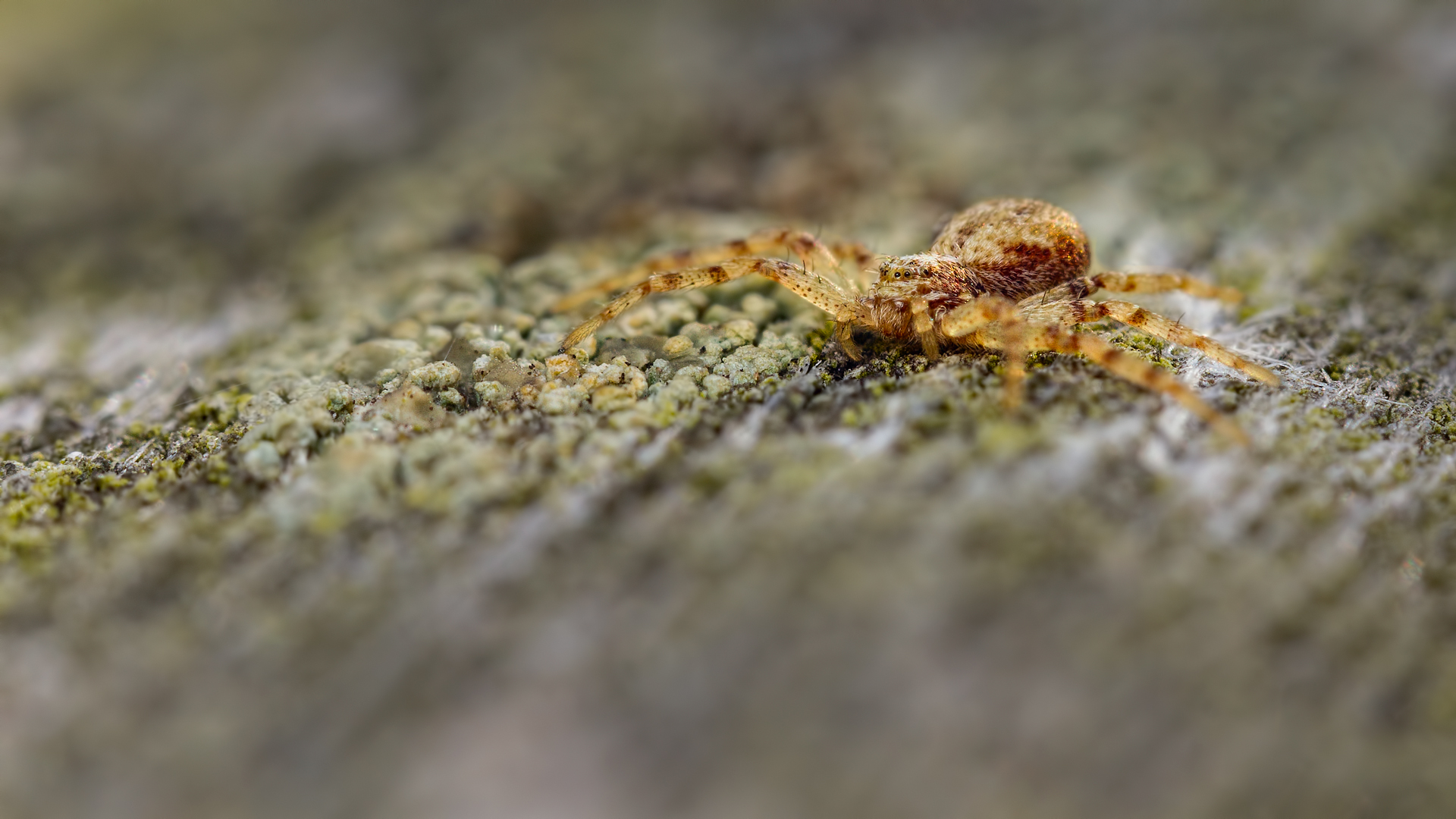 All in all spiders are a challenging subject. With so many species it is a creature I could photograph every day and not get bored. They can be found throughout the year and in so many places that you need not travel further than your own house to find them, though many of us choose to believe they are not there. So day or night, rain or shine, they are there to be photographed, as long as you don't get the shakes.